The main tool for making progress in personal and work projects

Earlier I told you how I manage my social media with Amplifr and how I manage record label duties with Trello, and today I’m going to talk about another work tool – a to-do list.

A to-do list, or a task manager, is an application where I write down everything I need to do. To-dos can be anything from small everyday tasks like buying bread to big and ambitious projects like buying a house

I use a few simple rules to make the whole system works.

Rule number one is to write down everything. If something isn’t on the to-do list, then it’s not needed

The great thing about this approach is that it frees up your head. Once you’ve written it down, you can stop thinking about it and focus on something else. In general, it seems to me that the human head is not well suited to remembering many things; at least mine is for sure. And with this approach, it’s simply impossible to have a scenario where you forget something because the app remembers everything.

I also try to formulate the notes so that it is always clear what it’s about, even if I look at them a year later. It happens that you quickly add a to-do, and while you are in the context, everything is clear. And then you look at it a day later and think, “What did I mean by that?”.

For example, a to-do titled “Lord Of The Rings”. What is it? Read a book? Buy a book? To finish the book? Remind a friend to return the book? Watch a movie? What is there to do? It’s not clear.

To make it clear, I usually put a perfect verb at the beginning: read, buy, outline etc. But there’s a nuance here, too.

See, above I gave the example of the “remind a friend to return a book. But you can remind a friend, and he is like, ‘Oh, yes, yes, of course,’ and will be gone for another year. With this formulation, a to-do will be formally completed because you’ve reminded your friend, but at the same time, the book still remains with him. So in addition to making sure that the note begins with a verb, I also try to specify the ultimate goal. Finding out the goal is very easy – to answer the question ‘why?’.

In our case with the book, it wouldn’t be ‘remind to a friend’ (to remind – why?), but ‘take the book back.’ Or not ‘call a barber,’ but ‘make an appointment for a haircut. Or not ‘remind Tim about the prepayment,’ but ‘get prepaid for the project from Tim.’ Feel the difference? Such simple wording changes allow you to focus on the real purpose of a particular task.

Next, I’ll show you concrete examples of how it all looks and works, and I’ll also tell you about the application I use.

Over the years, I’ve used various programs: Apple Reminders, Things, Trello, Todoist, Monday, Wunderlist, and some others I can’t remember the names of. Right now I like Things the best.

May not be right for you.
The apps listed above are very similar in nature but very different in detail. For example, Todoist is paid with a subscription, Things is paid with a one-time fee, and Apple Reminders is free but for Apple users only. Wunderlist integrates with Microsoft’s office suite, while Things works only on Apple operating systems.

If you choose the app for yourself, be sure to consider different options because it’s not a fact that what I use will work for you. Here I am sharing a general approach and my experience with it, not advising a particular app.

So, Things. Here’s what the app usually looks like to me: 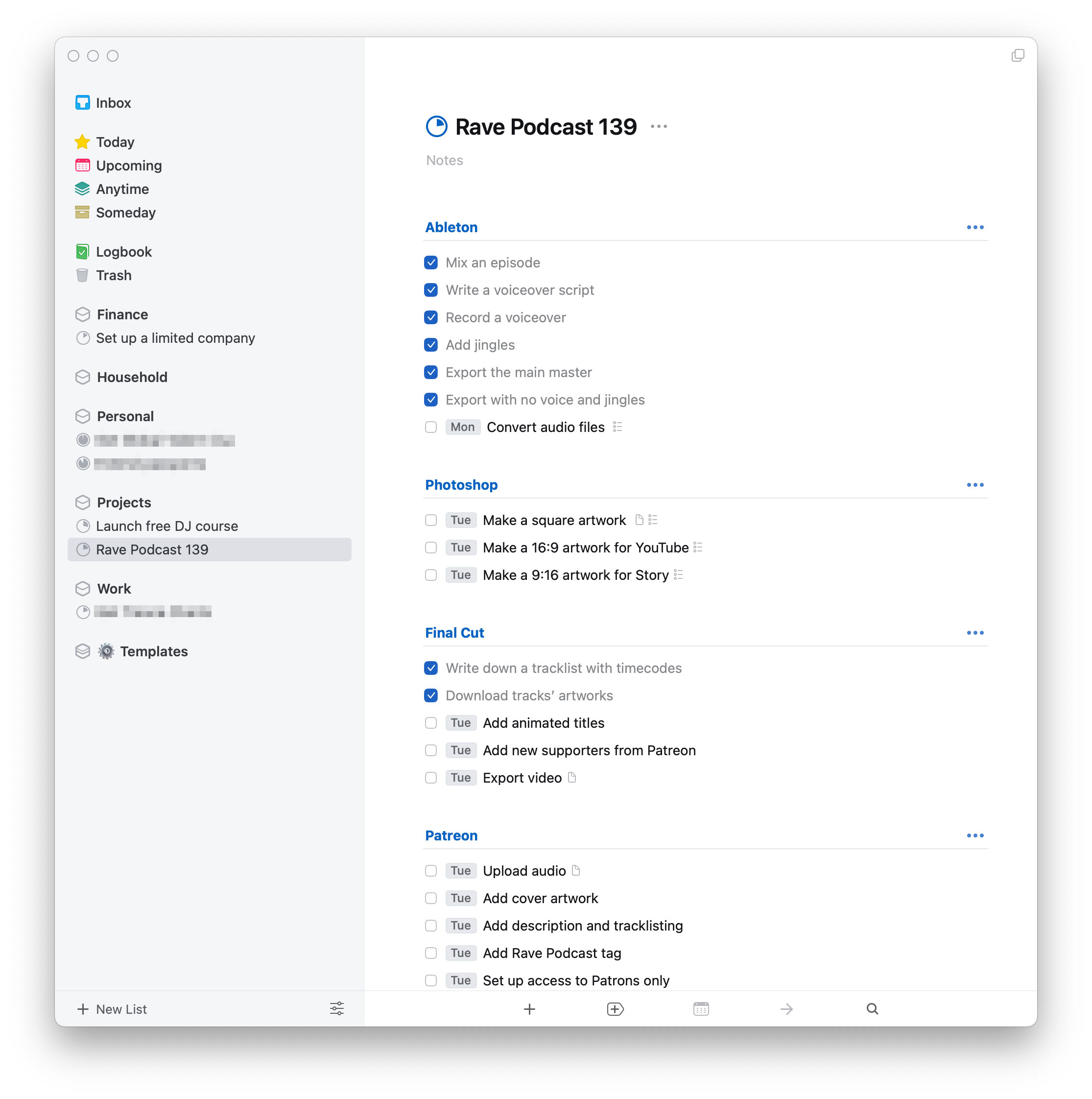 Things app on macOS. The names of some projects are hidden for privacy reasons

Look in the upper left corner, where the coloured icons are. There, Things automatically sorts out to-dos into tabs, from which the priorities and deadlines are built:

You can quickly switch between tabs by pressing ⌘+1—5

Inbox. A place where I quickly write down everything before I forget. Some tasks also go here automatically, I’ll tell you about them below.

Today. Tasks I plan to do today. I usually make this list the day before to know exactly what I’m going to do in the morning. Tasks that come up during the day first go to the inbox, and from there I plan them for the next day or after, and thus the to-do list for today doesn’t grow during the day (with very few exceptions).

Upcoming. Things planned for the next days, sometimes months and a year in advance. I check in at the end of the day to see what I have planned next and make adjustments if necessary.

Anytime. Things that I haven’t set a specific start date, which means I can start them at any time. This is where I have the bulk of my deadlines: there are usually a hundred or two to-dos, sometimes more. The great thing about this category is that I always have something to do at any time. You know how it is: you go through some big project for hours, and then you realize that you’re tired, your efficiency has dropped, and you need to switch to something else. Or vice versa: you have done all the work for today, and the whole evening is still free, and you think about what to do. In both cases, I just open this tab Anytime, from which I choose small, pleasant things to do, and so I gradually progress.

Someday. Things that I would in principle like to do someday, but for some reason, I can’t start doing at any time, unlike the tasks in the category above. These are usually big projects that are interesting enough to come back to someday but are not yet important enough to start doing them.

The system I described above helps to determine priorities and deadlines: what to do and when to do it. But a logical structure also groups tasks into projects and areas.

Projects. Big tasks that cannot be done in one sitting. For example, you can’t just make a new podcast episode in one take; it’s hours of work, which requires mixing the set, recording the voice, exporting, converting, making cover artwork for different formats, making videos, rendering videos, sending them to radio stations, uploading to Soundcloud, posting on social networks, and so on. So I combine such tasks into projects. The projects have a round icon on the left that gets filled in as you complete the tasks in it.

Areas. Projects don’t live by themselves, they somehow relate to some topic that unites them, and in Things, this grouping of projects is called an area. For example, in my case, that’s finance, household, personal, projects, and work. This makes for a simple and logical nested structure.

I wrote above that some tasks get to my inbox automatically. One such example is the advice series.

It used to be that a person would fill out a Google Form with a blog question. I would get an email notification from Google saying, “Hey, you’ve got a new result on that form”. I got into the Google Dock and copied the question into my program. Of course, that kind of manual work sucks, not to mention that I occasionally forgot to do it.

So I decided to automate this process through the Zapier. If you don’t know, it’s an automation tool for almost any app: you can tell it, for example, “take data from this service, do something with it, and send it over there”. It has another known competitor, IFTTT, but I like Zapier more – I’ve been using it for a long time and for other apps too, so I highly recommend it.

Now with the advice series, it goes like this: a person fills out a Google form → Zapier sees a new line in the Google table and sends its contents to me in Things → I get a new, neatly designed to-do in the inbox. How good is that!

If you’re using to-dos too, tell me in the comments about your approach and the app of your choice, I’d love to read about your experience too. 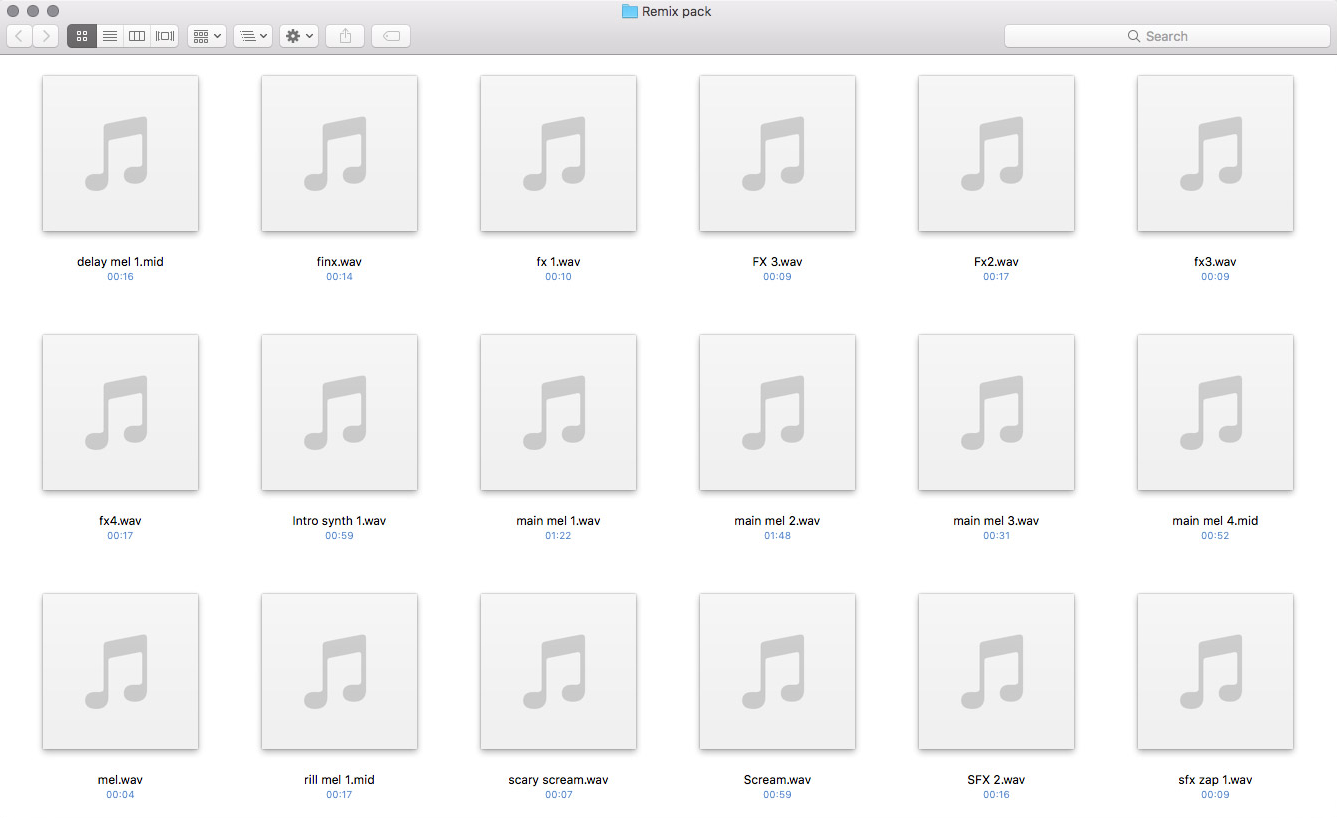