And its physical properties 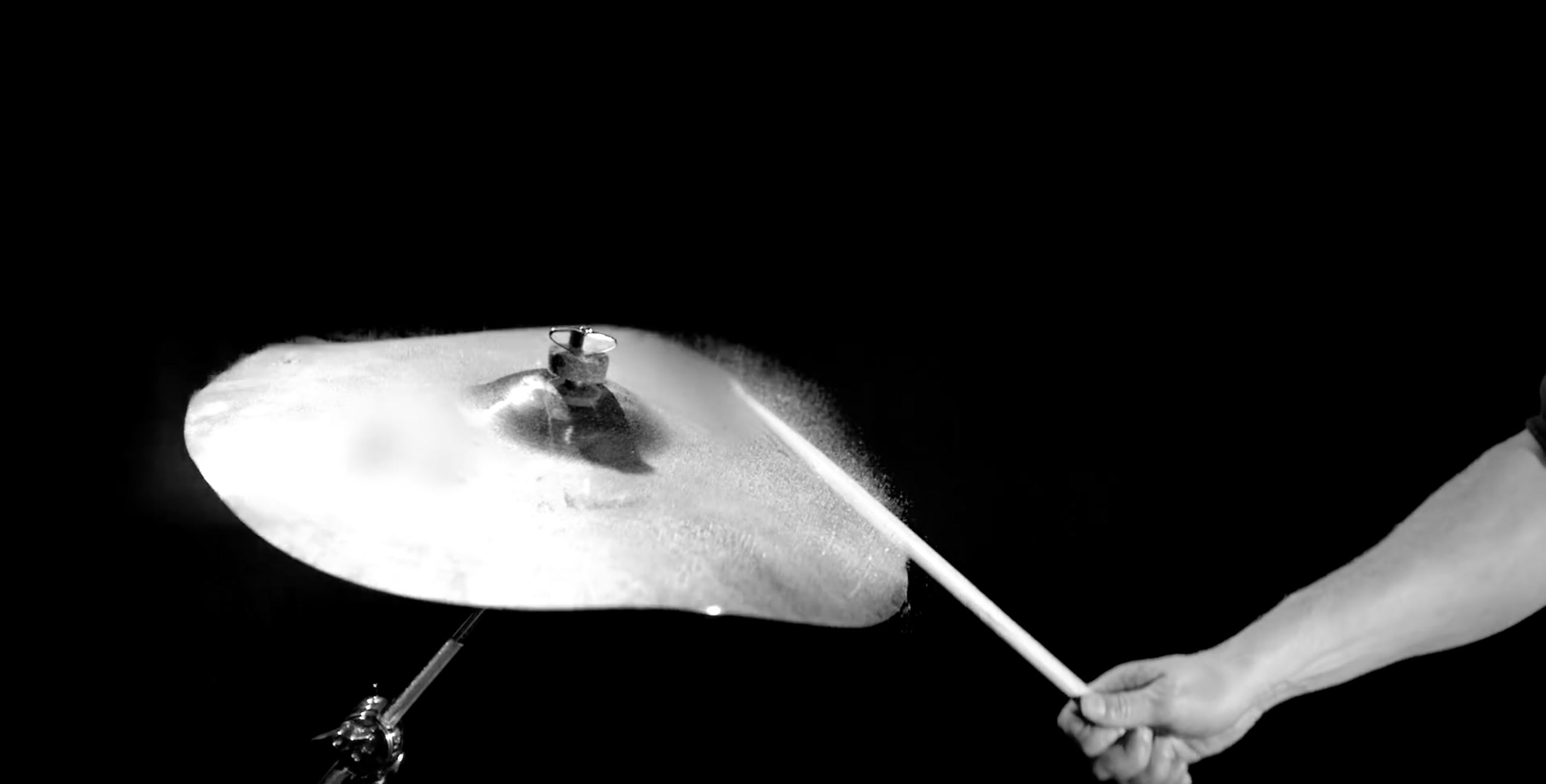 Why does “the loudness war” exists? Why music instruments sound differently? What makes them sound lower and higher?

All these questions require an understanding of the very basics of sound itself, so to answer the questions we have to go to over the fundamentals of sound and its physical properties. This topic is extremely important for music producers of all kind, find at least 20 minutes to read it.

If we get rid of the complicated words that people use to describe things, the sound is pretty simple. Sound is a vibration. That’s it.

The beauty is that the air carries the vibration very accurately. If the object wiggles in a certain way, the air molecules around it wiggle exactly the same way. Then, getting into our ears, the air molecules cause the eardrum to vibrate exactly the same way. Nerve signals are sent to the brain, which interprets them as sounds. So we hear the sound.

Sound has three physical properties: amplitude, frequency, and waveform. Let’s take a look at all of these.

By hearing we perceive the amplitude as loudness: we hear light wiggles as quieter sounds, and stronger as louder ones.

However, the measurement of loudness is kinda tricky. The point is that human ear perceives loudness logarithmically, i.e. by the ratio between the two signals. To express volume changes close to human hearing, we’ve got unit called decibels, referred as “dB”.

Decibel is the relative unit, it can tell how loud or quiet the sound is only relative to something. By that “something” can act the very sound itself, or some reference level. Thus, we have two kinds of measurements with decibels: a so-called “dB Gain” and “dB Level”. I know it may sound confusing, but these things are important for understanding.

As an example of the first measurement type, the dB Gain, let’s take a channel mixer in the DAW which you might be already familiar with. If we drop down the fader to -6dB, it means nothing but that the volume will be 6dB less relative to the originally recorded sound. 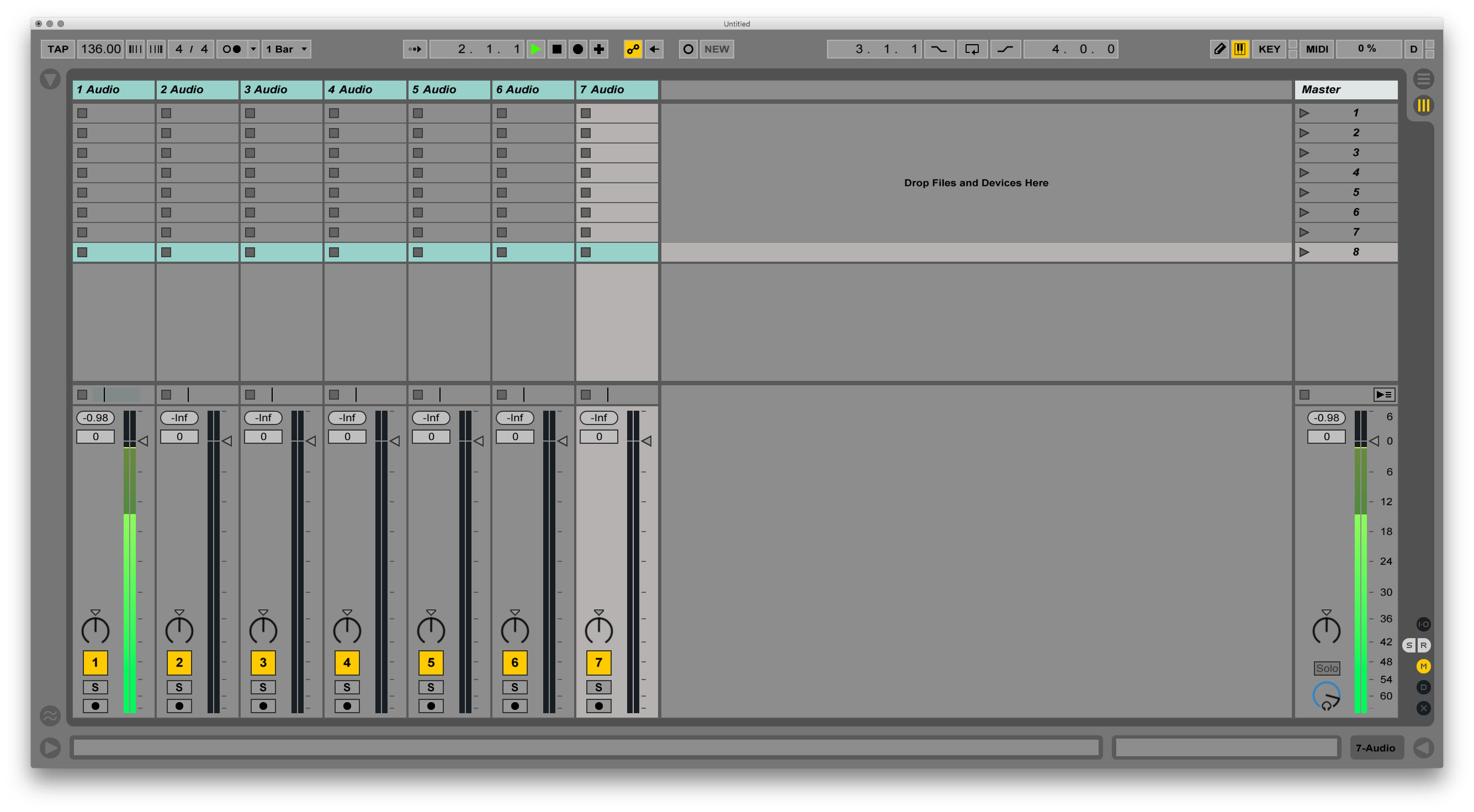 Picture 2. Channel mixer in the DAW is an example of dB Gain

The measurement of the dB Level occurs relative to some level, which is taken as the reference point for this particular scale.

One kind of such reference level is the threshold of the human hearing. For its measurement, we use the decibels with “SPL” suffix, which means sound pressure level. In this scale, zero decibels, or 0dB SPL, is the quietest sound that human hearing can perceive — it cannot go down below. To give an example: the volume of a whisper is about 30-40 dB SPL. Or: a regular conversation is around 50-60 dB SPL. The level of 120 dB SPL is considered as the threshold of pain, the excess of which can cause the hearing damage.

Another kind of reference level is the operating level in the digital systems. The fact is that in digital audio, zero decibel is the upper threshold. Everything above is subjected to the noticeable distortion or deterioration of sound. And it’s very important to understand. As you can see, unlike the threshold of the human hearing, in the digital world, the sound is counting down from its maximum value. And the decibels which are used to measure on this scale are called dB FS, where the FS refers to the “full scale”.

There are more types of decibels that are used to measure voltage and power, but I won’t talk about them in this instalment.

The point of using decibel is that after changing the volume, for example, 6dB up or down, we will hear the sound at the same level, regardless of the sound source and the measurement scale. It is a universal unit, made to fit our non-linear perception of sound.

The speed of the object’s vibrations is called frequency. It’s measured in hertz (as “Hz”) and in fact, very simple: one hertz is equal to one cycle of vibrations per second. The “cycle” is the full movement of vibration: back, forth, and back to its original position.

If an object wiggles less than 20 times per second, our ears would not hear the sound. The same occurs if an object wiggles more than 20000 times per second. Thus, we have a frequency range of the human hearing: 20 Hz — 20000 Hz. But it is theoretical. In fact, we more feel rather than hear the bottom line, while the upper limit is about 17-18 thousand hertz. Frequency below 20 Hz called subsonic, above 20 kHz — ultrasound. Cats can hear much more than this.

By hearing we perceive frequency as pitch. Slow wiggles we hear as low sounds, fast wiggles — as high sounds.

For instance, let’s take a standard tuned 88 keys piano. The note “A” of a fourth octave, A4, wiggles 440 times per second, i.e. on the frequency of 440 Hz. If we double this number, we’ll get the sound on octave above — A5. And the opposite, if we divide this number by half, we’ll get a lower sound — A3. Here it is, the mathematical beauty of music!

This division is pretty abstract, in addition, each group is divided into further sub-categories. But it is necessary for a general understanding of the picture.

Because of our non-linear perception of the sound, there is one more interesting thing: we hear different frequencies at different volumes. Moreover, this difference varies depending on the volume of the sound source.

In 1933, two American physicists invented a graph, which later became known by their last names — “The Fletcher–Munson curves”. 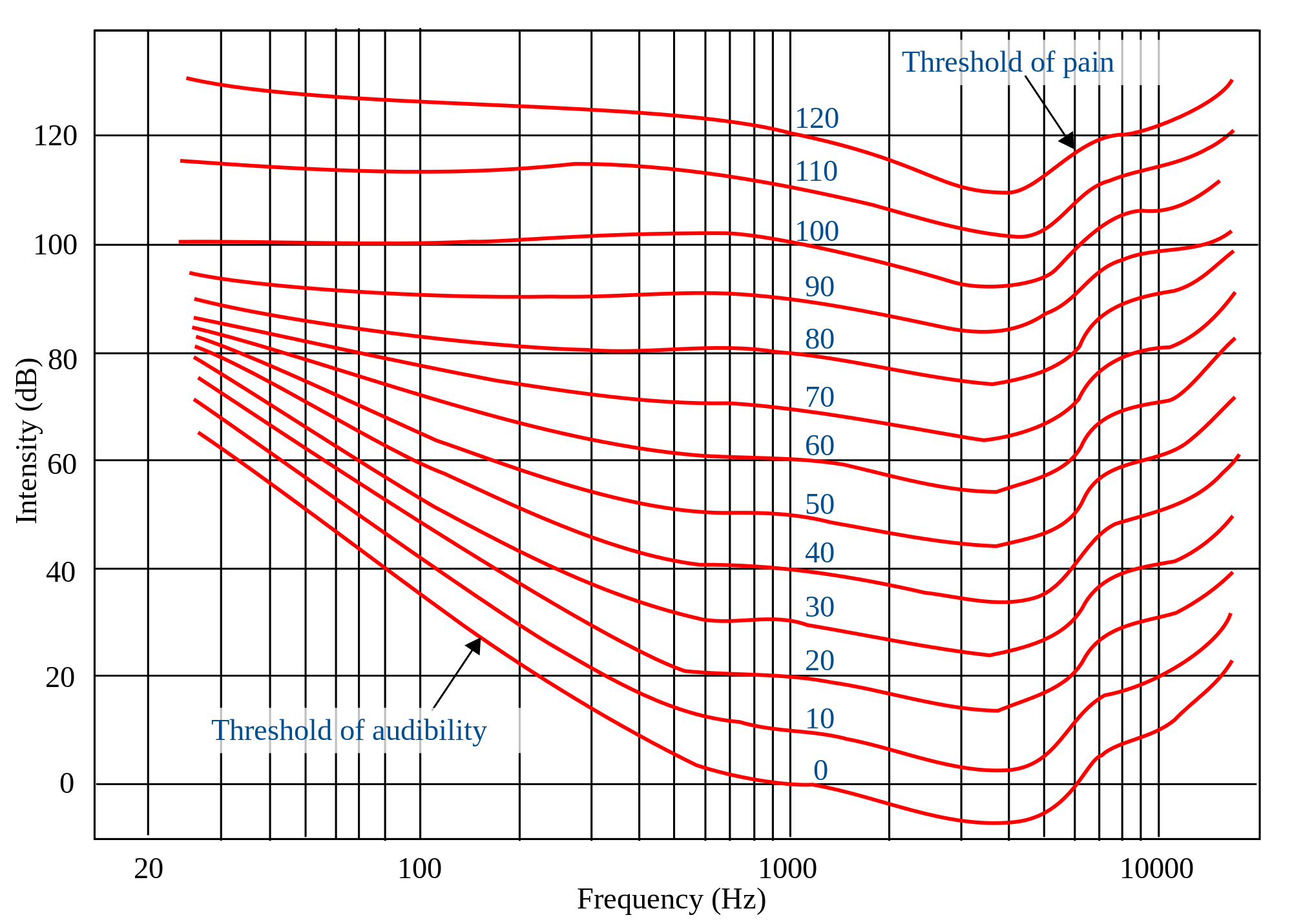 In this graph, the loudness level is positioned vertically (relatively to the human perception threshold), horizontal — the frequency range. Reference frequency, at which we perceive loudness as it is, it’s at 1000 Hertz.

These lines tell us the following. For example, let’s take a volume of 20 dB SPL. To hear the low frequency (20 Hz) as this particular level of loudness same as we hear 1000 Hz, it is necessary to increase low’s volume to 60 decibels. That’s huge. The overall trend is the follows: we hear the low and the high frequencies quieter than the mid ones.

That’s important to understand at least for two reasons:

Goes tight? There are plenty of tech talks below. Take a rest, make a cup of tea. 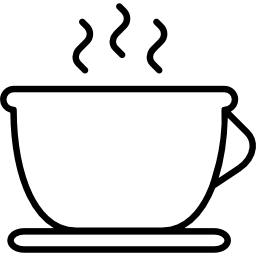 Let’s get back to our imaginary string. Now imagine a more extravagant picture. We attached a pencil to the middle of the string, and it moves up and down along with the vibration of the string. And a paper roll is moving behind this pencil. It turns out when you pluck the string, the pencil will draw a line. This line is the waveform.

Waveform (or wave shape) is a graphic representation of an object’s vibration, which is needed to reproduce the sound. Not some abstract thing, but a specific visual graph of this particular sound.

In such a way, what sound we hear depends on the waveform. By hearing we perceive it as a timbre.

Sinewave is the simplest wave shape. However, we couldn’t find such simple sounds around us. Moreover, if the instruments had the same waveform, they would sound the same. Fortunately, the piano, the guitar, the violin and hundreds of other instruments sound differently.

In fact, an object wiggles not only in a single spot. If we pluck our imaginary string, it will also vibrate on the middle of its length, then on the each third, then fourths and so on. And the smaller this interval, the faster its vibrations are. As a result, we have a series of wiggles, one simple sound on top of another one. This series of vibrations called harmonics.

Picture 5. The nodes of the vibrating string are harmonics

In the example above, the number of 110 — is the basic amount of these particular harmonics, which is called the fundamental frequency. And all wiggles above are called overtones.

Let’s write it down to avoid confusion:

If vibrations are not in mathematical relation to each other, like, not in harmony, we perceive such sound as a noise. For instance, the sound of the waterfall.

On cover image: vibration of a cymbal in slow-motion. In fact, the solid object acts almost like a liquid, and its vibrations causing the sound. How cool is that? 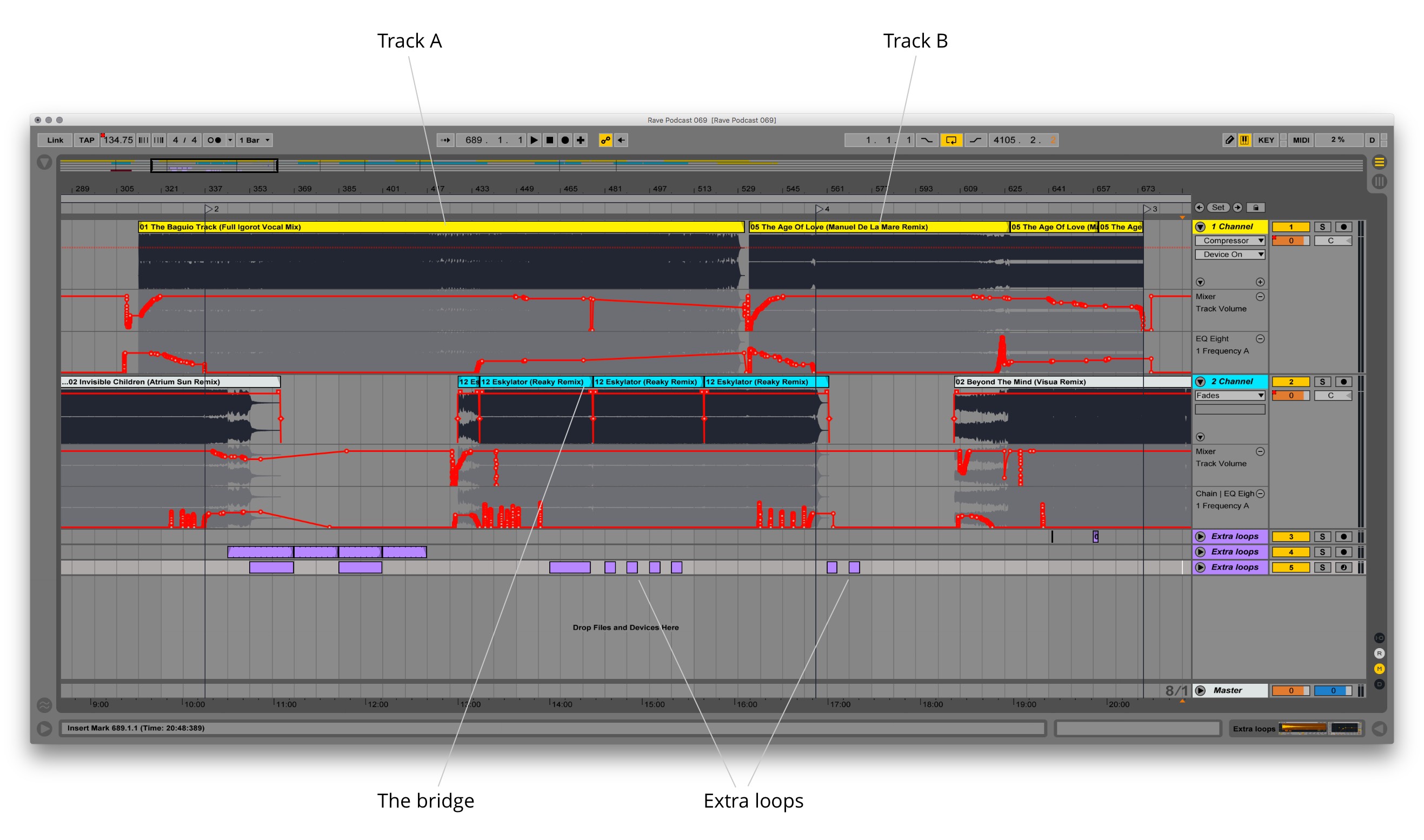 The bridge technique in DJ mixes
“How would you mix two tracks if they share a similar feeling and you really want to put them in a set, but they have different harmonic keys? Would you sacrifice harmonic mixing to keep the vibe going?”. A question from Timothy Huff
1    766   2016 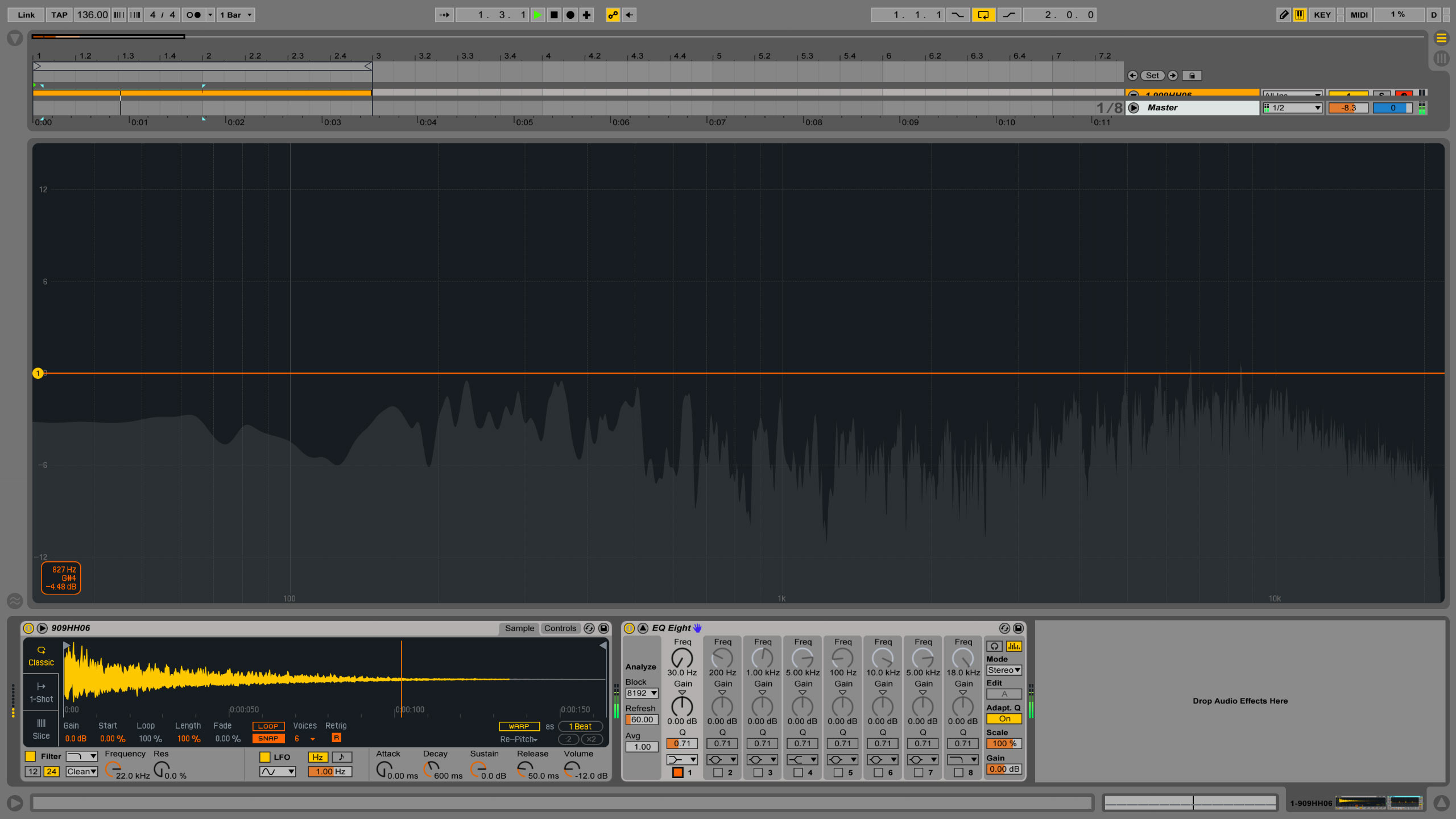 Would love to hear some elaboration on some of the concepts, such as the fact that if sound is basically vibration, and vibration is energy, that makes sound a form of energy.
Our bodies are capable of experiencing this energy in ways other than just our hearing. This is why we can ‘feel’ sounds, e. g. bass seems to hit us in the stomach at times. I saw Leftfield play live once where they tweaked just a playing kick drum down in pitch until it got below the threshold of human hearing , then kept it there and the crowd kept moving to that beat, even though it could no longer be heard.

As psytrance and related music is designed mostly to be listened to at very loud volumes on big sound systems, should a mix be calibrated to cater to this? e. g. If you set the level of your bassline so that it sounds correct in proportion to the rest of the mix at low volume, won’t it sound too loud when played on a huge system?

Similarly with frequencies. If you have a kick drum that has a very low frequency ‘thump’, when you play that on a massive sound system with 21’’ subs, you will feel those frequencies more than hear them, but if you are on headphones or small monitors in the studio you won’t get that same feeling. How do you mix with that in mind?

Our bodies are capable of experiencing this energy in ways other than just our hearing.

Yes, that’s correct. Acoustic sound is a mechanical wave, so it can “punch you in the face” literally if you stand close to a big enough PA system.

... should a mix be calibrated to cater to this?

No it shouldn’t, but it is something that producers have to keep that in mind when making music. Let’s say, if you make a track at 40 dB SPL — which is really quiet — you won’t be able to hear the bassline properly. So you think “the track has lack of bassline pressure, let’s boost it”. As result the bassline will be oversaturated at higher volume.

How do you mix with that in mind?

Luckily, there are many tools available to help musicians on that: graphic equalizers and spectrum analyzers. They help to see sound even when you can’t hear it. Look at the pictures here for example.