The benefits of “no”

Success story: Tim Bourne’s behind the scenes on reaching out goal through rejections 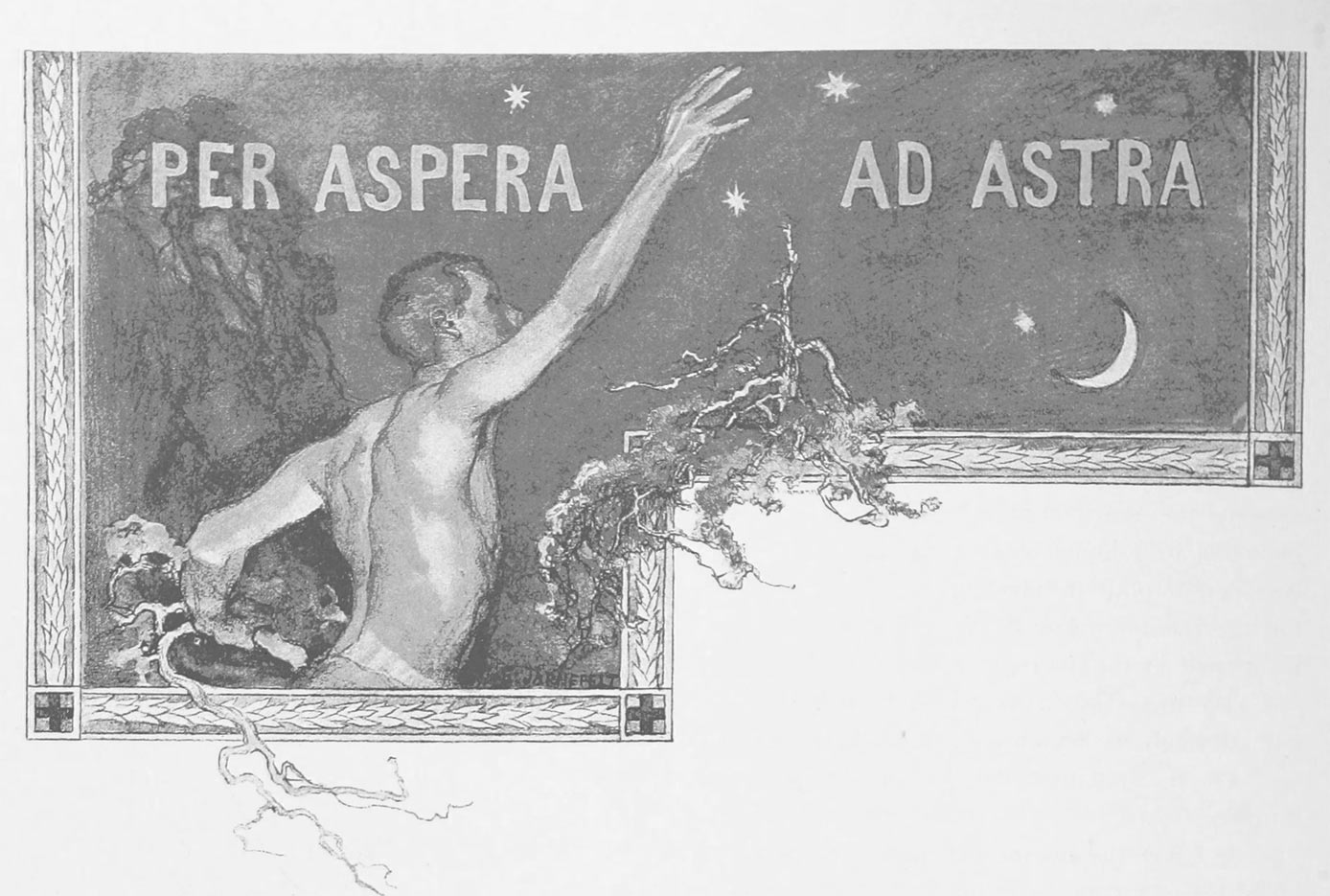 One of my daily duties as an A&R at JOOF Recordings is listening to incoming demos we receive on a regular basis. And whether I like it or not, I have to say a “no” as an answer very often. Artists react to rejection differently: some of them never reply back, some others get angry. Well, no surprise: getting a “no” answer is tough, I know it myself perfectly.

But one guy stood out: every time I told him “no”, he came back with the updated track asking for new feedback. Four months later, he managed to make an amazing track that I was happy to sign on the label.

The guy I’m talking about is Tim Bourne, a 22-year-old aspiring music producer from Indonesia. I invited Tim to share his progression in this blog and I hope other up-and-coming producers will find his experience useful and motivating.

From there, Tim tells:

“To me, this drive of wanting to get accepted into JOOF started two and a half years ago when my friend introduced me to the label, ever since then my perception towards electronic music completely changed (in the best way possible). Since that it was something that I had to do, it was more than just a goal for me to make a track that lives up to the standards of the label.

I wanted to know where I sit when it comes to producing, am I really making something that is up to par — quality wise — or am i just making tracks that only sound good to my own ears, even then, my ears wasn’t really catching the small details of music production, I was missing out on so many essential parts of production.

I knew that it was going to be very tough because in my country there is very limited access to production courses or even Psytrance producers, so I had no one to really guide me on what to do technically or musically.

I would have never evolved with my music production if it wasn’t for no’s and rejections.

I started sending out demos to the label since 2015 — 20 years old by that time — and it was just no’s after no’s after no’s. In total, I’ve probably sent over ten tracks and one of the tracks I had to re-do and re-edit over five times due to song length, sound design, not enough variations, you name it... and it was still a big ‘no’. It actually got to a point where I was so pessimistic about myself and my music that after a couple of days after sending ‘The Wounded Healer’ I emailed to Daniel again and assumed that the track got rejected.

But alongside the no’s, Daniel was kind enough to actually give me very useful feedbacks, he gave me constructive criticism that was essential for my learning. And to be completely honest, I would have never evolved with my music production if it wasn’t for no’s and rejections. It was through this that I was able to learn and not just force any kind of sound into a track.

Here are some of the conversation we had on the track: 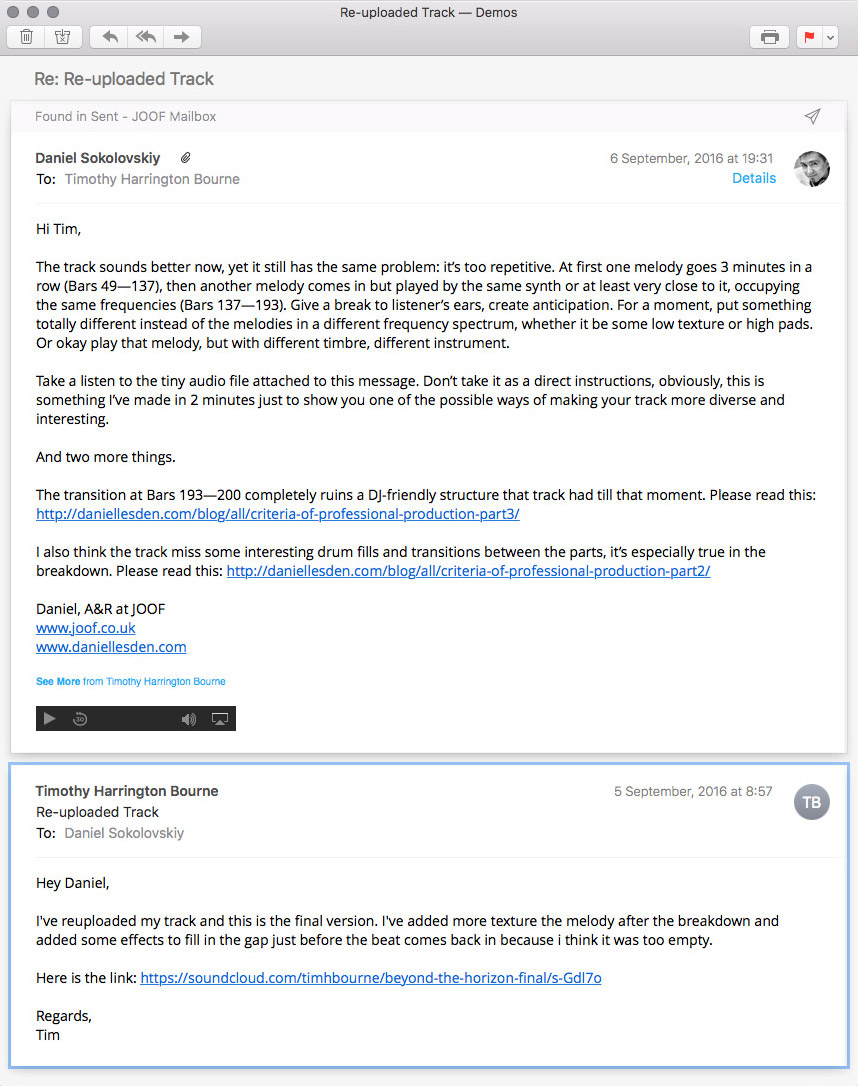 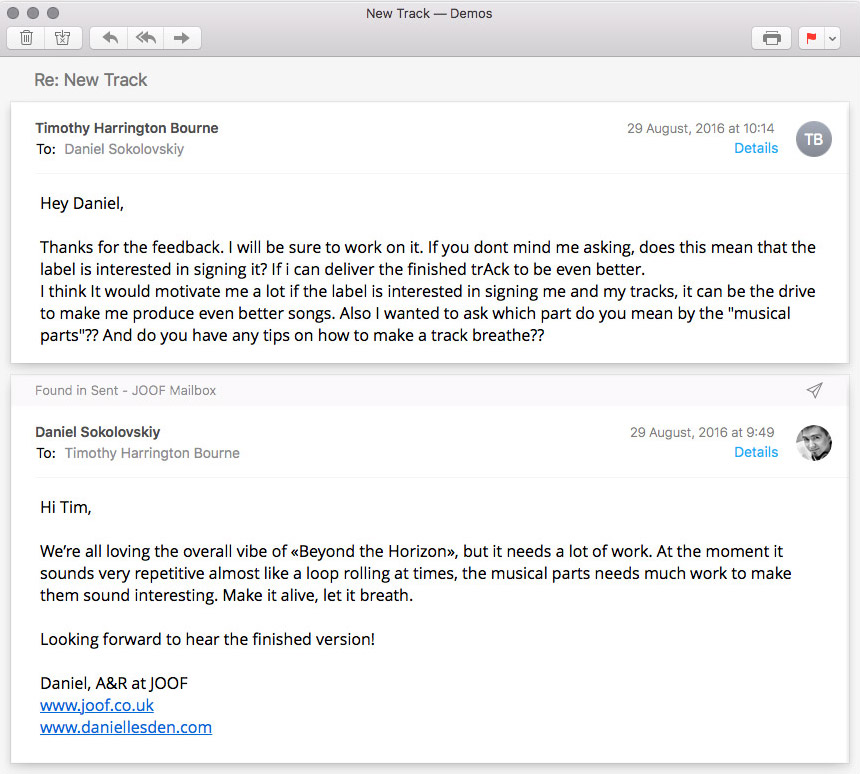 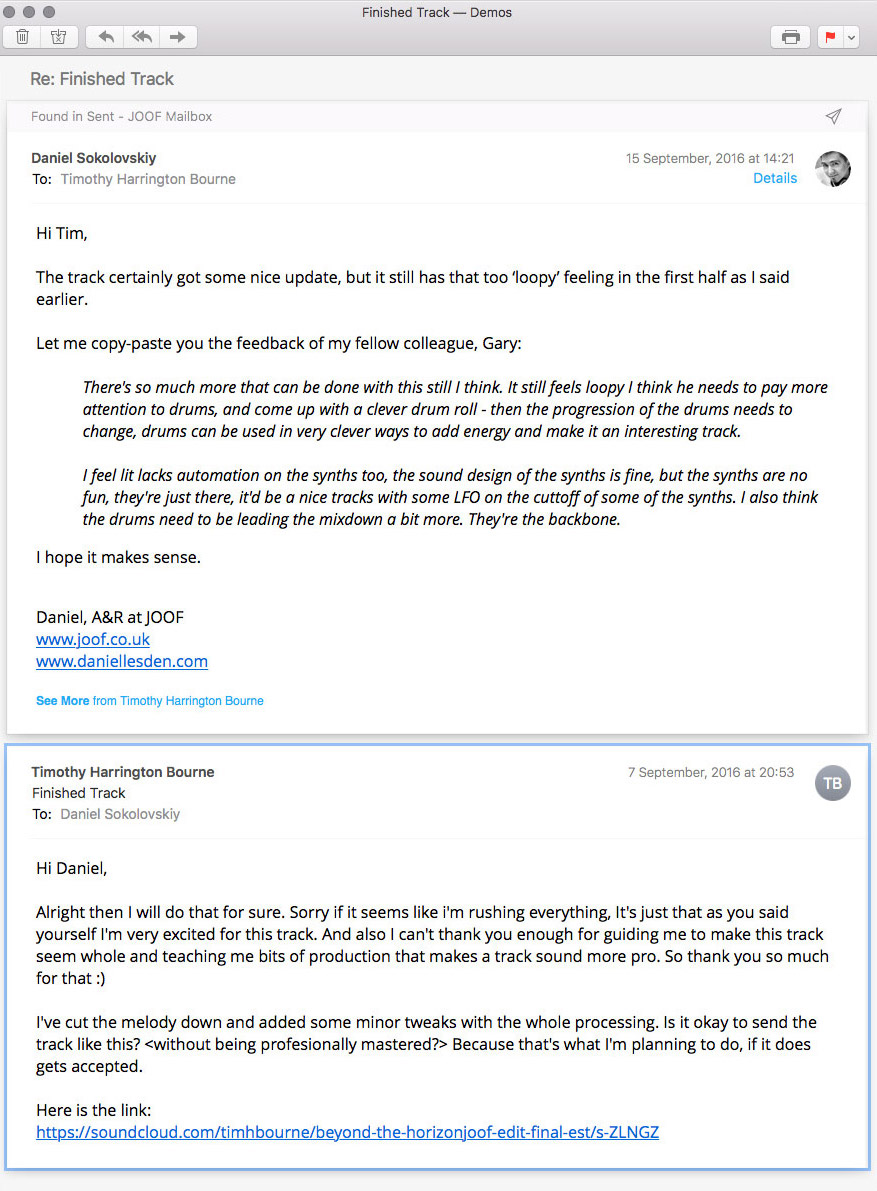 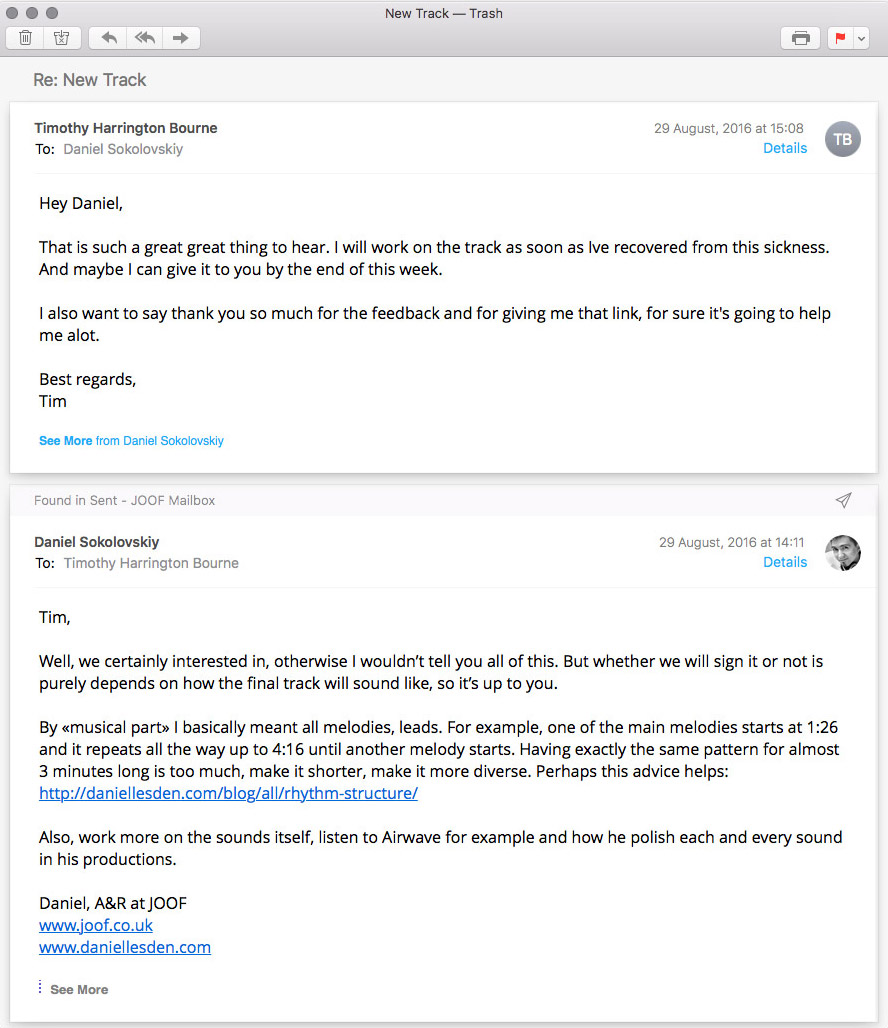 Of course, it was really hard to accept the fact that my music wasn’t quite cutting it, but either I stop and give up or just push through and make a track that I would have never imagined I’d be able to make a couple of years ago.

It started with this very flat sounding bassline loop with no melodies at all, just a pitched down FX:

As I was trying to fiddle around with the bass, I found a vocal sample that was perfect for creating anticipation for the groovy bassline. So I decided to add the vocal alongside a drum fill. I also added more processing to the kick and bass to make it sound thicker:

After creating what I thought was a strong body to the track, I know I have to accompany it with also a strong melody:

But i was not pleased because it felt like it was forced and it didn’t go smoothly with the track, so I changed the sound and came up with these two melodies:

Then comes the breakdown which I really enjoyed creating. I always have a thing for breakdowns, to me, it creates the emotion of a track. This was the very first version of the breakdown, very empty and the arp melody just didn’t feel right:

So I decided to completely change the arp melody because turns out that it was the melody that made it sound a bit weird. I changed the arp melody, brought back the FX’s and i added some ethnic percussion which drew the breakdown more into the theme of the song:

I created this melody as a draft but It just didn’t sound right to my ears, I was okay with it but I wasn’t happy with it:

I tweaked the notes of the melody a little bit, got rid of the acid and added more saw’ish sounding synths to layer. And this is what i came up with:

And alas, ‘The Wounded Healer’ was born:

I want to say thank you to Daniel who has given me the opportunity to tell a little bit about my upcoming EP, The Wounded Healer and also the story of how I managed to pull through after so many ‘rejections’ and ‘no’s’. ” 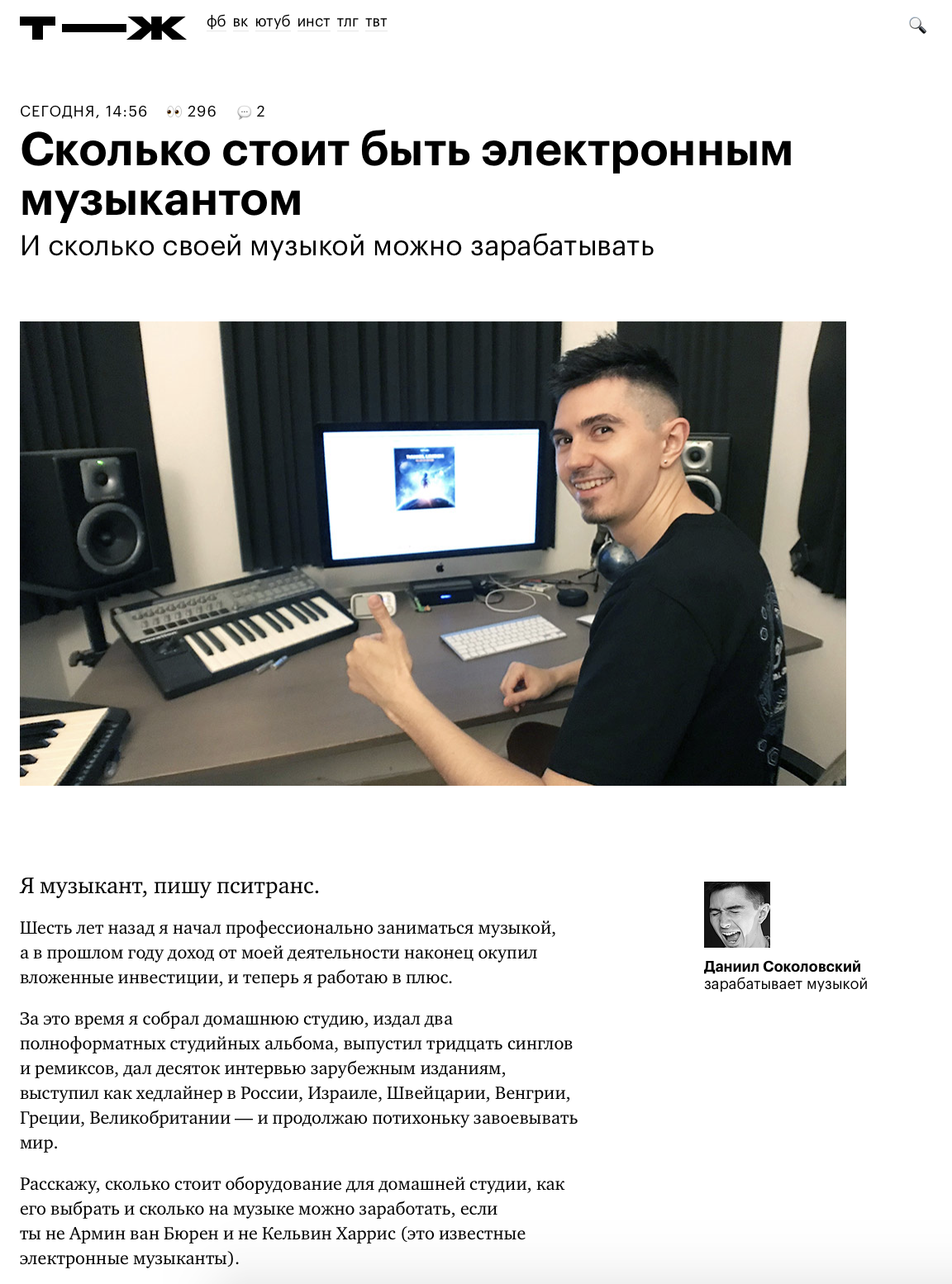 How much it costs to be a producer
I wrote a monstrous article for the main Russian finance magazine Tinkoff Journal, which tells newcomers about the economics of the music profession.
53   2018